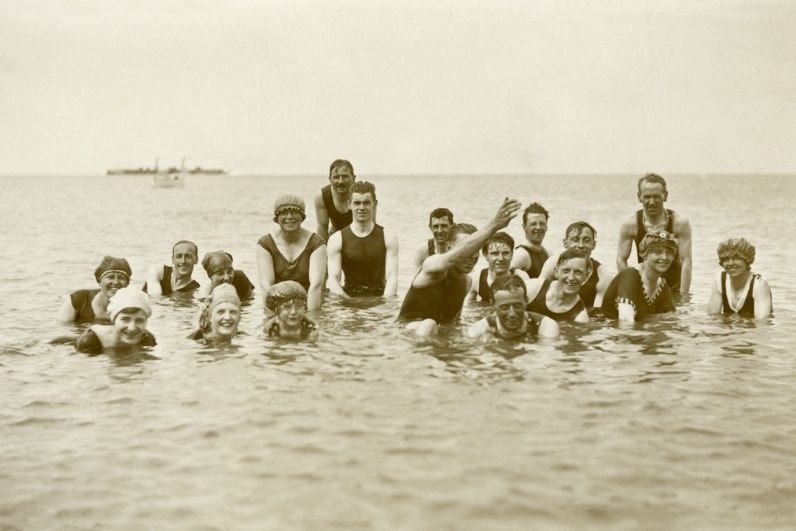 Swimming is an interesting sporting activity that dates back a very long time. It may not be something that’s on the school curriculum, but it’s a very interesting topic to read about in your free time. So let’s take a look at the history of swimming!

Where Did Swimming Originate?

There is evidence, particularly archaeological evidence which suggests that what we deem as modern swimming has been practised from as early as 2500BCe in Egypt and thereafter in Assyrian, Roman and Greek civilisations. Swimming was often a part of martial training in the Greek and Roman civilisations in order to help with strength and overall fitness.

During the time period of the ancient Greeks, there were records of occasional swimming races occurring.

As for swimming in Europe and the UK, it wasn’t really practised until around the late 17th century for Europe and around 1830 in the UK.

The question is why did it take so long for it to be practised in Europe? Well, according to Britannica, the lack of swimming in Europe during the Middle Ages is explained by some authorities as having been caused by a fear that swimming spread infections and caused epidemics. May have feared that COVID-19 was transmissible in the water, but you can read our article here about what the WHO said about COVID-19 and swimming.

Firstly, wearing a swimsuit did not exist historically. It was difficult for women to find something to wear for swimming. The Victorian bathing suits were a burden for women; slowing them down and uncomfortable making them a big burden.

As time passed and the Olympic games were first introduced, swimsuits were made more streamlined and a lot lighter in weight because the swimsuits at the time were slowing swimmers down significantly. Swimsuits now are skin-tight allowing better body fluidity and movement which allows swimmers to reach high speeds.

The first known goggles that were used for swimming were invented in Persia in the 14th Century. Believe it or not, they were made from polished tortoise shells. They were quite popular for around 2 centuries in the Middle East.

Wooden goggles were later used by Polynesian divers. The goggles used trapped air to maintain visibility underwater. However, they were only really useful when in a downwards position, otherwise the trapped air would escape and water would fill the goggles.

During the 1950s, open water swimmers used rubber goggles with lenses. The goggles were large and uncomfortable, but they did the job of keeping the water out.

Now we have different styled goggles that come in all sorts of colours and designs; some of them look really cool! Goggles have evolved so much over the years. Who knows what they’ll be like in the future.

During the 1950s, the breaststroke was the only swimming stroke that actually required a style and technique. The leg action had originated from copying the leg movement of frogs in the water.

A study in 1928 showed that performing the recovery part of the breaststroke was faster over the surface of the water in comparison to underneath the water.

During the 1930s, swimmers used this technique in swimming competitions. They started with a breaststroke kick and arm movement which is now known as the butterfly. In 1952, the combined stroke was split into what we now know as the butterfly and the breaststroke. The split occurred because the combination of the two techniques violated the original rules created.

A further rule was created in the 60s where swimmers’ arms were not allowed past their hips, apart from the first stroke when they jump into the pool, the turns and the pullout.

A further enhancement was made in 1987 where swimmers were no longer required to keep their heads above the water. This meant that swimmers must break the surface of the water after each stroke cycle, then put their head back in the water which makes the swimmer more streamlined, making them swim faster.

In 2004 and 2005, a rule was implemented where swimmers were allowed to do one dolphin kick at the start of the race and off of each wall in the pullout.

The evolution of swimming is fascinating and it’s amazing how much swimming has progressed over the years! Do you know any swimming facts? Let us know by leaving a comment below!

Do you want to learn how to swim the right way? We teach children and adults how to swim beautifully and we also run baby lessons! Click here to explore our programmes!

Prioritise Swimming This Summer With Our Fast-Track Intensive Courses

Swim With Confidence at Swimming Nature!