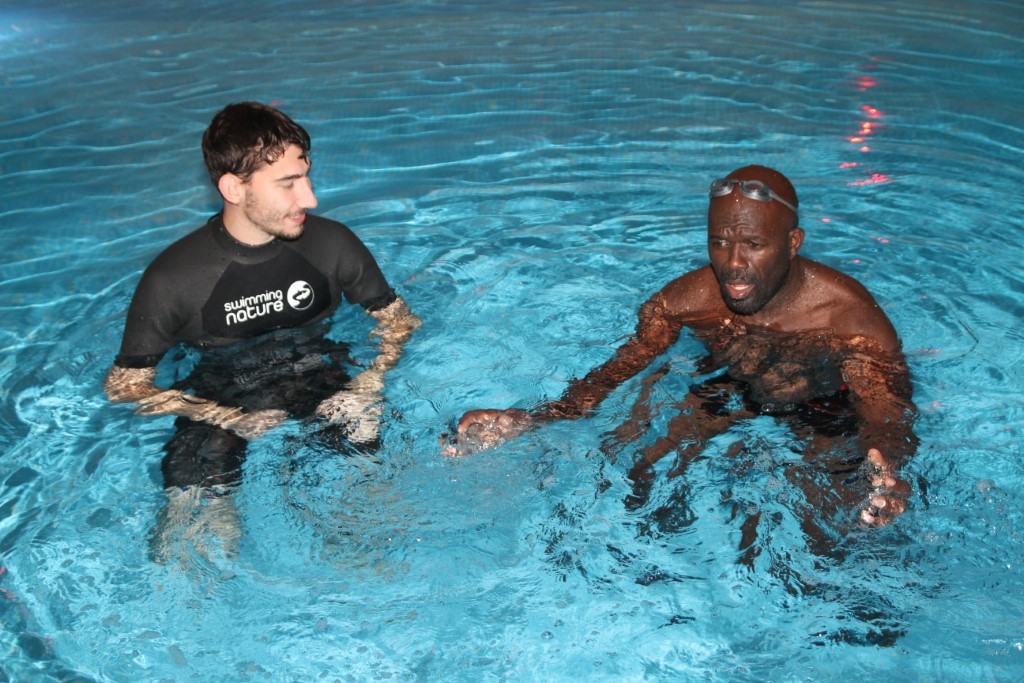 We were lucky enough to have Ed Accura, the producer and star of the recently re-released feature film documentary called ‘Blacks Can’t Swim’, co-founder of the Black Swimming Association and host of the podcast ‘In The Deep End’, tell us a little about himself and any exciting projects he is working on. Accura has relentlessly campaigned for attention to be drawn to prejudices where learning to swim are concerned, and is now working on finding ways to solve the problems that many Black, Asian and Minority Ethnic people face.

Q1) So Ed, please can you tell us a bit about yourself, and your background? How exactly did your feature-film come about?

I was born in the UK, and left to live in Ghana when I was around 9 years old. I only returned to the UK when I was around 18 or 19, having never learnt how to swim. I only started realising that this would be an issue when there was a party at one of my friend’s houses, who happened to have a pool! I asked my mum if I could go, and she refused as it would have been unsupervised. Learning how to swim had never been a priority for me in her eyes, and instead she was keen on me studying the hardest I could, so I didn’t go.

When I came back to the UK, swimming was never something I needed or wanted to do. If anyone asked if I could swim, I would say ‘of course I can’t I’m black’! I knew about all of the stereotypes, and I knew a lot of others who would use it as an excuse too.

Q2) Leading on from this, how exactly did your film come about? Can you tell us about the plot of your documentary too?

Well, it was only until August 2018 that I started to see that my situation needed to change. At this time, I went on holiday with my wife and daughter to Barbados, along with some of my friends who are originally from there. During our stay, on a particularly nice, hot and sunny day, our group decided that they wanted to go out on a catamaran. As they were planning on diving and snorkelling, I wasn’t going to go, but at the last minute I changed my mind. Whilst we were out on the sea, we were all given a lifejacket, and I kept mine on the entire time. Everyone who could swim had started dipping in and out of the water, and I was left alone on the boat and was very bored. I decided to fill this time by writing a song about swimming, using the film ‘White Men Can’t Jump’ as my inspiration, but instead focusing on black people and their supposed inability to swim.

I brought this song back to the UK with me, and one day got a message out of the blue from a company called Swimming Nature. They mentioned that they wanted to teach me how to swim, in an effort to highlight the number of black people that think they can’t. In order to do this, they mentioned that they wished to document the swimming journey I would go through. Strangely, around the same time, my friend had suggested we make a film about the same topic! We all joined forces, and I sat down to brainstorm the main story. In the film, I see a news report about flooding, and panic. Instead of learning to swim, I decide to wear a lifejacket all of the time. Two forces have comments to make about this decision – my friends and family say that it’s ridiculous, and ‘Mr Society’, who represents society as a whole, says that I’ve done the right thing due to me not having the right physical makeup.

Q3) Why do you think that so many people in the UK black community of minorities are unable to swim?

Mostly, I think there’s a lot of stereotypes and myths that are prevalent in our society. The main issue with black and ethnic minorities deciding not to swim is their choices where prioritisation is concerned! This is why as part of the campaign, I decided to highlight swimming as a life skill, and I try to get people to understand that they shouldn’t be scared of water. Instead, in reality, they should be scared of not being able to protect themselves from the water, and this is where the issue lies.

Q4) What can we do to change this as a society?

Well, I saw the film as being an equivalent to releasing an elephant from the room. This whole issue is one that has been around for generations, but we don’t talk about it – instead we laugh about it! I thought this would be the time for change, and it’s been a long time coming. For example, Africa has the highest drowning rate, followed by Asia, and we need to resolve this. I’ve put so much effort into this project so that this will be the end result, as every black or ethnic person should be made aware of these statistics.

Q5) Can you tell us about your own personal experience with swimming, and how you came to swim in the first place?

I’m currently learning to swim with Swimming Nature, and my instructor Mark Trude is just awesome! I think it’s so important that the swimming teacher understands and sympathises with the fact that many ethnic minorities think they can’t swim. Alongside this, they need to be patient, which Mark is especially.

A story that Alice Dearing told me, whilst I was interviewing her on being the only black swimmer on Team GB, springs to mind – apparently, a black lady was told by her instructor that she had a big bottom and heavy bones, and this is the reason why she was struggling to swim. This is complete nonsense! There’s so many stereotypes out there, like having heavy bones, and yet nothing has been proven. Instead, it just gets to the point where people think ‘oh well I’m black and I have heavy bones, I can’t swim anyway, so why should I bother’. So in my mind, it’s clear that whoever the instructor might be, they have to understand this issue. I can truly say that Mark does, he’s amazing. He’s managed to eradicate any fear I have, so that I can trust the water.

Q6) How exactly did the project take off? And what has recently happened as part of your podcast?

Straight after the initial release of the film, things really took off. I had close to a thousand requests from people who wanted to watch the documentary, from Australia, Africa, Asia… all over the world! At first, the only place you could request to watch it is on the website, www.blackscantswim.com. I set it up so that people had to fill in the online form when they visited the site, and then I sent them a link to watch the whole thing. Now, if you wish to watch the documentary, it’s being streamed to a global audience via Amazon Prime, Apple TV and Hulu amongst other premium digital movie services.

Overall, the momentum is great. However, I have never wanted it to get the point where people would get tired of my voice, and there was only so much I personally could say on the matter. I needed to find a way of getting other people to share their stories, and that’s when I came up with ‘In The Deep End’, my podcast. On this platform, I interview influential people who are black or from ethnic minorities so that they can tell their story about swimming. I feel as though this will encourage more people to pay attention, as another big issue we have with swimming is the current lack of role models. It’s a well-known fact that you can’t be what you can’t see! So the more people we see that are swimming, plus the more people we get talking about swimming, the greater the chance of us actually doing it is. This is incredibly important for the younger generation in my eyes, as my ultimate aim is to get more people swimming and less drowning in the near future.

You can read about Ed’s projects by visiting www.blackscantswim.com. More information on the Black Swimming Association which Ed co-founded alongside Alice Dearing, Seren Jones and Danielle Obe can be found by visiting https://www.thebsa.co.uk/, and Ed’s personal social media pages are full of useful resources:

If you are interested in swimming lessons, we are more than happy to help you on your journey, no matter what age or stage you are at. Our teachers specialise in teaching non-swimmers, and we understand the importance of encouraging the BAME community to confront their fears and any underlying stereotypes. You can find more information about lessons by visiting www.swimmingnature.com, or book by visiting https://book.swimmingnature.com/enrol/.

How To Keep Your Kids Busy And Motivated During The Lockdown

How Body Flotation Can Save Your Life